The math equation of beauty 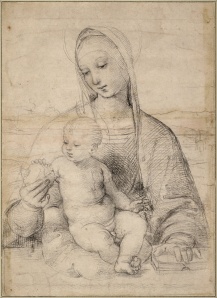 “She is beautiful, she looks like a girl” said my doctor, while visiting the recovery room, just few hours after I gave birth to our daughter. I remember staring at her porcelain cheeks and face, trying to discover what exactly was so obviously girlish about her. Her lips? Her eyelashes? What? She was cute to me, but I don’t remember being all smitten when I looked at her, like, wow, I have seen a beautiful cherub girl! I was not really sure how to view this tiny, gentle face in front of me. I may have even pulled a blank, Lucy head tilt while scanning her face for the first time. Her nose was slightly bent to one side, she had a temporary red stain on her face, she resembled someone, but surely not me, she was strange, but she smelled heavenly! I think for me, it was neither sight of her face, nor sound of her voice, that sparked the first bond between my girl and me, it was the smell of her. How primal of me… I would look at her, and there would be a baby there, they said she was mine. But, each time I held her, and closed my eyes, this crazy inner wilderness took charge, and I was transported, with her in my arms, straight into the jungle, like a lioness. Only then, I felt like it was palpable, euphoric and real. My husband, he had no obstacles bonding with his girl, seconds after she arrived. As soon as he heard her little whimper of disapproval to nurses poking and shoving, he stuck his shaved head right under the warming lamps and kissed her little chest, soothing and comforting her. She instantly stopped crying, they were in love! 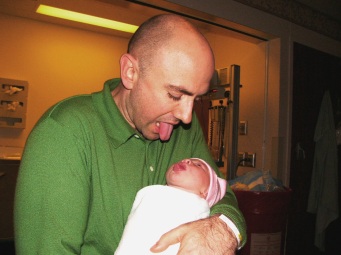 Egads! Even if I felt a relentless pull, few moments after giving birth, to drag my 3 times epidural-ed body 20 feet across the floor, to the other side of delivery room, to comfort her, I am sure they would have restrained and sedated me. I was left with no alternative but to chill, and admire the sights and sounds in front of me.  So, I took pictures, and today, I am so grateful that I did. My sweet, late husband holding our tightly wrapped loaf of new, strangely familiar looking baby, sticking her tongue out at him, and him playfully returning the gesture, was all I needed in those moments to start feeling slightly less alien, and a little more human. Several months later, at a family gathering, someone whispered giddily in my ear “Don’t tell Rob I said this, but she is a spitting image of you”. At the time of hearing this, I didn’t know how I felt about it, it certainly deserved some introspection. I could see resemblance, but because of my warped sense of confidence and self, which my mother masterfully engineered through experimental parenting techniques she applied on me, I was not connecting the dots and making the equation. It wasn’t until few years later, when I looked at the pictures of myself, same age as my daughter then, that I validated to myself this notion that she looked so much like me. The next step of the equation was the toughest one of all. It involved connecting several years worth of compliments on my daughter’s beauty and finally summing it up. If my daughter was beautiful and she closely resembled me, at her age, that meant I was beautiful! Imagine my surprise. 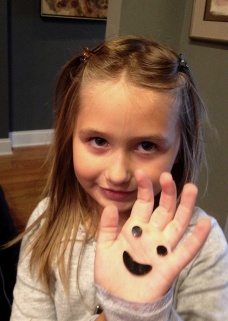