Two girlfriends were having lunch at the table next to us. One was very tall and stunningly beautiful. She looked like a super model, peeled from the page of a fashion magazine, and plopped onto a chair next to us. Her skin was glowing in exotic shade of flawless pale coco, her body was elegant and graceful, her posture was royal. The way her fingers wrapped around her glass, or the way her lips perked up when she was taking a sip, the way her face glowed, or her shiny, perfectly coiffed dark hair draped softly over her shoulders, it made her simply hypnotic to observe. Her girlfriend was shorter, dressed simpler, her hair was up in a messy bun, she wore smart looking glasses, and looked plain, pretty, yet barely noticeable next to her shiny friend.

After few seconds of practically staring at these ladies, we returned back to our conversation about the strange weather, and continued to glance over the menu in search of tasty treats. The next few minutes left me needing to bathe, to clean up the grotesques that spilled only feet away from me, splattering me with yuk, making me cringe.

The waitress showed up with two salad bowls, they were identical, filled with greens and colorful veggies. She placed them in front of each friend and turned over to our table next. But neither the waitress, nor I could focus on anything but the two friends who just received their food. The tall and stunning friend eagerly scanned over the two bowls with most focused and calculating interest, quickly grabbed the bowl sitting in front of her friend and pulled it in front of her, exclaiming: Your salad looks better than mine, I’m going to take it! 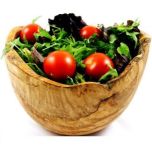 I am not sure how I managed to place an order, stunned by the absurd display of strange entitlement, callus, vane human conditioning, based on what exactly? Possibly only the superficial, outer beauty, which was as deep and as fascinating as only the first few bites into the slice of her life. Her friend did not react to this, something tells me she was used to it. The waitress was so stunned, she was not able to speak. She just stood there, staring at me, with her eyes wide open, as if she needed someone to slap her back out of shock.

Lunch went on, and our conversation about the strange weather continued, but the energy around us, the nagging thought knots that mangled our heads were palpable, and they made the windows to my soul, temporarily covered in this sticky, smelly goo of beautifully wrapped grotesques, waiting to be power washed as quickly as one could say salad greens.